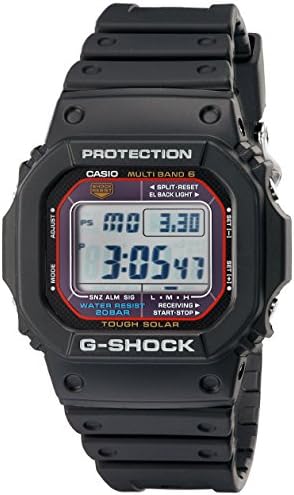 Made in the USA or Imported

Auto light feature will not work if the battery level falls below Medium (marked as M on the face of the watch).

With the launch of its first watch in November 1974, Casio entered the wristwatch market at a time when the watch industry had just discovered digital technology. As a company with cutting-edge electronic technology developed for pocket calculators, Casio entered this field confident that it could develop timepieces that would lead the market.

Today, Casio is focusing its efforts on solar-powered radio-controlled watches: the built-in solar battery eliminates the nuisance of replacing batteries, atomic timekeeping means the users never have to reset the time. Recently, Casio launched a series of Bluetooth watches that sync to the users cell phone to automatically update the time. Casio is always moving time forward.

The most durable digital and analog-digital watches in the industry, trusted by military personnel, law enforcement, surfers and outdoor enthusiasts around the world.

"Necessity is not the mother of invention, invention is the mother of necessity." These are the words of one of Casio's founders. The people who created Casio were determined to 'invent necessity'- to create products that met latent needs with groundbreaking capabilities no one had ever seen before. Ever since, Casio has been doing just that, bringing new discovery and delight to people around the world. This is Casio's way of building an even more prosperous, richly rewarding world.