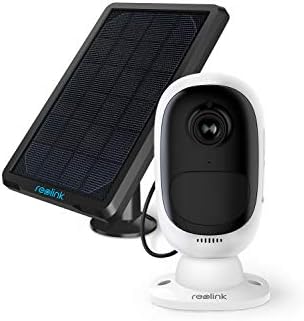 No Wires Simple Installation - Reolink Argus 2+Solar Panel wireless battery security camera is rechargeable and get Non-Stop solar power supply with its own solar panel. No need to plug into power ever. Plug and play, neat easy installation requires no drilling so you can install it yourself in a few minutes with complete instructions. Work with Google assistant is also a hassle-free option to complete your home security system.

Vivid 1080p HD and Stunning Night Vision - This wireless detachable battery powered security outdoor camera can be slipped from the magnetic mount to take out with you. With starlight CMOS sensor and 6pcs 850nm infrared LEDs, the 1080p Full HD IP camera has advanced 33ft night vision and 130° wide field of vision, and get crystal clear videos and detailed images in a wider field even at night.

Record to SD Card and Cloud Storage - Micro SD card slot accepts up to 64GB for home security camera recording. Supports backup videos on Reolink Cloud to avoid the risk of losing footage and never be concerned about privacy leaks. Watch your property and pets in home while at work or at night with reliable Reolink security camera system.

Remotely Access Camera via Free Reolink Software - Live view and playback through the security camera via your iOS/Android phones or through windows or mac computers with free Reolink app or client, no monthly subscription fee required. Allowing up to 10 family members or friends to live view the surveillance camera simultaneously. Only support 2.4GHz WiFi.

Rechargeable battery and WiFi connectivity make Argus 2 totally wire-free. No network or power cable, no drilling and no outlets needed. This wireless IP camera can be put anywhere you want.