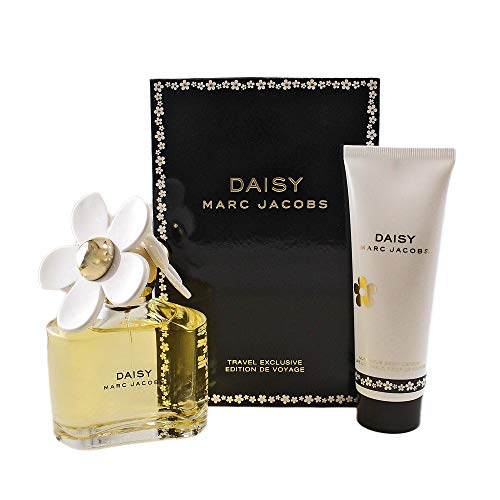 From the first whiff, Daisy intoxicates as fresh violet leaf, uplifting blood grapefruit and sweet strawberry notes float around you

Floral notes, including captivating gardenia, make up the romantic heart of the fragrance

An earthy base provides an air of intrigue, swirling with enchanting and mysterious musk notes

Đánh giá
bởi Amazon Customer
Well, there’s a first time for everything....I’ve heard all the horror stories about people buying knock-off’s on Amazon, but it’s never happened to me. Until now. Was disappointed when I opened my package to find that the box was smooshed and beaten up. But this wasn’t the deal breaker. The gift box, beaten up as it was, came sealed in plastic wrap. There was no evidence of tampering at all- it appeared to be brand new/intact plastic wrap, just like you’d find it packaged in the store. I removed the plastic wrap, and as I started to open the box, I immediately noticed that the box was flimsy and cheap- nothing like the thick cardboard-lined boxes I’m used to opening when I buy a bottle of my favorite perfume from a department store. Still, not the deal breaker....I opened the box, and both the bottle of perfume, and the hand lotion, are individually wrapped in old crumpled-up white tissue paper, and separated by random plastic wrap...never ever everrrrr seen any packaging like this in all the years I’ve been buying this perfume, or any nice bottle of perfume, for that matter! I couldn’t pick my jaw up off the ground!! I bought a knock-off!!! Not maybe- FOR SURE! The box that it came in, upon closer inspection, told a story all its own. The gold dots in the middle of the flowers were off-center, the box was not lined with any kind of cardboard or reinforced at all- no partitions inside to separate the perfume from the lotion- just the two “loose” items, wrapped in third generation white tissue paper!!! Yuck!! The letters printed on the outside of the box weren’t raised or imprinted, and neither were the flowers that line the border of the box. The perfume’s bottle had similar irregularities, as did the lotions....I won’t get into all the nit picky details, but I can assure you that this IS NOT the real thing! What I will say, however, is that the quality of this perfume is very high and it smells exactly like the real thing....the fragrance itself, is nearly indistinguishable from an authentic bottle of Daisy. Still, I’m disappointed. I almost purchased two sets of this discounted perfume & lotion, with the intention of saving the second set to give as a gift....so glad that I didn’t! I would have been sincerely embarrassed if I’d had this gift set delivered to anyone!!! I don’t know if I was just unlucky and this was a fluke, or if this is a persistent issue with this seller...whatever the case may be, buyers beware!!!! The price is really great for this gift set, assuming it’s authentic. But paying $60 for a fake? No matter how similar the perfume smells to the original, it wasn’t worth my money! Proceed with caution!!!
bởi Juliana
This is a fake! The scent is completely gone in less than 10 minutes after applying. Do not purchase!
bởi Linda Rector
The lotion is fake, there is absolutely no fragrance to it, I haven’t even tried the perfume yet. Last time I bought this I very satisfied, however not this time. Perhaps this was a different seller? I didn’t notice. I am probably going to return both items, disappointing since last this product was good.
bởi Brittany N. Sorensen
This has been my favorite fragrance for years now; I've tried to give other perfumes a go (including the other versions like Dream and So Fresh) but the original Daisy is by far the best scent for me! I love that it's more of a clean, flowery smell that's lighter than many other similar fragrances. I get compliments on it all the time; with both men & women saying those coveted phrases "You smell amazing!" & "What is that you're wearing?"I loved that not only was it the larger bottle (3.4 oz), but also came with a fabulous lotion for the same price as as the perfume alone. The lotion is light and helps the perfume really 'stick'! I was a little apprehensive reading some of the reviews warning that they received a knock off but with how many bottles I've purchased over the years I can say with total confidence that what I recieved was 100% the real deal.
bởi juan
No sirve no tiene fijador la crema no sirve es falso totalmente 👎👎👎
bởi Aurum Expressions
Smells amazing, great price. The bottle itself leaks at the spray nozzle pump, so I have to keep it upright (can't carry it in purse like I usually do). But for the price, I can't complain about it much. That's the only downfall. 🙂
bởi Sara B Negron
This fragrance is for all day staying. It’s not strong but delicious.
bởi Christina Davison
I absolutely love this perfume but it is very small. When you buy this one you are getting the sample size. I knew that when I bought it just wanted to pass that along!