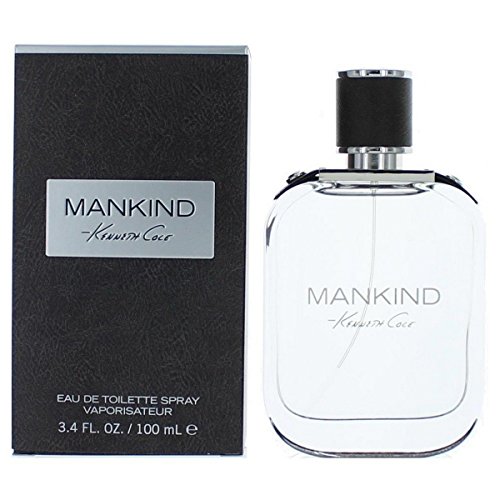 Kenneth Cole launches a new men's fragrance called Mankind that have resulted from the new partnership with Par lux: “The fragrance is meant to speak to that Renaissance guy. He is accomplished but humble, he is strong but sensitive. He’s got a very clear sense of. . . where he is, where he’s going and how he’s going to get there. He’s very much focused on looking good but also doing good. " (wwd) . The fragrance is advertised with cheeky slogans such as “Join the Evolution “and “Your ape will either grow more hunchbacked or erect". The fragrance is developed by Claude Dir as aromatic - woody. Fresh aromatic elements of cardamom, tarragon leaf, ginger and pineapple lead to masculine elements of cedar, vetiver and cinnamon that provide warm sensuality. Then comes the base of sandalwood, oak moss, Tonka bean and skin musk. Chad Lavigne designed the bottle. The fragrance is available as 30, 50 and 100 ml Eau de Toilette. Mankind was launched in 2013. This product is manufactured in USA.

Kenneth Cole has embodied the boldness of New York life. Those who chase their dreams no matter where they live.

A true gentleman, he makes an appearance unknowingly and without pretension. His cool, calm and refreshing confidence are evident in his every move. Fresh notes of pineapple and pear are spiced up with cardamom, tarragon leaves and zesty ginger to always keep things interesting. In his heart lies a strength and character that many notice, but few get to really know reflected with assuring woods and a hint of unexpected cinnamon. As his personality unfolds one layer at a time, nuances of sandalwood and oakmoss are brushed with a gentle hint of tonka and wrapped in a masculine skin musk. Be the evolution - Mankind.

The bold, aromatic fragrance for the modern man, who is defined by his own expectations. Be the evolution - Mankind.

Fresh notes of pineapple and pear are spiced up with cardamom, tarragon leaves and zesty ginger.

In his heart of lies a strength of woods and a hint of unexpected cinnamon.

Nuances of sandalwood and oak moss are brushed with a gentle hint of tonka and wrapped in a masculine musk.

Đánh giá
bởi JSS
I imagine they make this cologne by mixing unicorn tears with the sweat of Hercules and essence of the great outdoors. It's truly magical.I've included a photo for further clarification.
bởi FLMomOf3
As someone who has problems with scents and headaches... this was a great purchase for my husband! He has been using Kenneth Cole Reaction for years now, so we thought we would try Mankind. It definitely has a 'manlier' scent, but still has that clean/fresh scent that we love. It seems to last quite a while without being overwhelming. We definitely will purchase again.
bởi Amazon Customer
This cologne smells good, the only problem is the scent does not last very long. I also have Mankind Hero and this scent lasts all day. A little disappointed in the original.
bởi JVega
Loved the scent that I tried at the department store. I left it on for hours before decisided to purchase the product at amazon. The product had the same labeling and scent as the tester at the store, very unfortunately the strength and length the scent lasted was not the same at all. Very disappointed.
bởi Kate B.
I absolutely love this cologne for my husband. We have tried all different kinds and stumbled on this one when the store was out of his regular. I love the simplicity of the bottle and it is not cheesy looking or like it belongs to a teenager like other bottle designs. It is not a heavy scent and he wears it daily for work. It doesn't give me a headache like others have and the cost for this size was unbeatable than other beauty stores. Great cologne!
bởi DBA
In the same boat as a lot of scents. Very safe semi sweet like a Jimmy Chooish/Eternityish type of mens cologne.Some might say its generic but I dont think so its a nice good smell. It lasts a good while and has moderate projection.This type of cologne is very versatile can be used in ANY situation its not invasive its not annoying nor is it over powering but it is clean smelling nice scent for a man of any age.I bought this from the seller Beauty Encounter because of past experience and being happy with all my purchases from them thus far (more so than Amazon directly) and I find this to be 100% authentic.
bởi erdgnern
I got that cologne for $40 when it was on sale. If we keep in mind that price, this cologne is one of the best bang for the buck. Smells like detergent in a way but I think none of us dislikes that scent, thus for most of us, Mankind is a clean/fresh/perfect fragrance. Though for some it is a manly scent, I do not agree with that. Women can easily wear this cologne. I wouldn't say that it is long lasting, yet if we consider that it is not an Eau de Parfum but a Eau de Toilet, it has an acceptable duration. Since it is not a heavy scent, it is not good for Winter, however it is good for Fall and Summer and for me, best for the Spring.As a final thought, for $80 it is kinda over-priced yet if you like aromatic - woody elements on a cologne, looking for new scents, and it is around $40-60, then you should definitely give a shot for Kenneth Cole - Mankind.
bởi Ricky Harris
You know,,, it was ok, not the best sillage, went away fast, good fresh scent though, but got sick of it fast, luckily this was a blind buy anyway I didn't really care about. Also when you work construction it's ok who cares haha