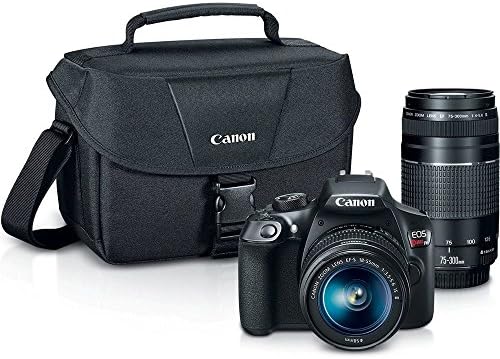 The camera with the quality your photos deserve, the EOS Rebel T6 can be ideal for smartphone or digital point-and-shoot camera users looking to step up their imaging game. It's equipped with an 18. 0 Megapixel CMOS image sensor and the DIGIC 4+ Image Processor for highly detailed, vibrant photos and videos even in low light. Whether you're out on an adventure hike or snapping candid's of your friends during a late night out, the EOS Rebel T6 can help you take photos you'll want to show off. Built-in Wi-Fi and NFC connectivity make it easy to share, print, or get your favorite pictures up on select social media sites for your friends, family and the world to see. If you're new to DSLRs, Scene Intelligent Auto mode can conveniently and automatically adjust the camera's settings to suit your subject. Easy to use and simple to share with, the EOS Rebel T6 delivers high image quality that's sure to catch the audience's eye. Specs: Digital, AF/AE single-lens reflex camera with built-in flash SD, SDHC and SDXC Memory Cards Not compliant to UHS-I (Ultra High Speed) standards. Compatible with Eye-Fi Cards. Multimedia cards (MMC) cannot be used. (A card error will be displayed. ) Compatible with Canon EF Lenses (including EF-S lenses, excluding EF-M lenses) Canon EF Mount. LCD Monitor Coverage = Approx. 170 Degrees vertically and horizontally.

The EOS Rebel T6 camera can be ideal for anyone looking to step up their imaging game. Equipped with an 18.0 Megapixel CMOS image sensor and many automatic and creative options, the EOS Rebel T6 is easy to use, simple to share wirelessly with and delivers impressive image quality to your audience.

Full HD Made Easy and Bright

Record Full HD video with superb quality and beautiful background blur, even under low-light conditions. The EOS Rebel T6 is compatible with all EF/EF-S lenses to help you realize the “movie director” in you. Try different lenses for fun and new perspectives.